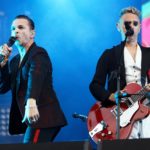 Depeche Mode‘s Dave Gahan and Soulsavers, born Rich Machin, will be releasing a covers album that will see them providing their take on tracks from Neil Young, PJ Harvey, Bob Dylan, and more. Titled Imposters, the album is set to be released on November 12 via Columbia records. Speaking on the new release in an official press statement, Gahan said of the project,

“When I listen to other people’s voices and songs—more importantly the way they sing them and interpret the words—I feel at home. I identify with it. It comforts me more than anything else […] There’s not one performer on the record who I haven’t been moved by […] I know we made something special, and I hope other people feel that and it takes them on a little kind of trip—especially people who love music and have for years.”

Gahan and Machin recorded Imposter at the famed Shangri-La Recording Studio in Malibu, California back in 2019. This new record follows their 2012 album, The Light the Dead Sea and their 2015 LP, Angels & Ghosts. The first single from Imposter, a cover of Cat Power’s “Metal Heart,” will be released on Friday, October 8.