Lost Prince directs D.V.R.X and Charlotte Haining to Axtone for future piano house classic, ‘Everything I Do’ 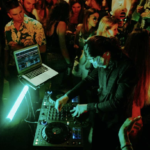 After taking an original-only intermission this summer following “Always On My Mind” and pursuing his in-person unveiling in Athens, Greece, the enigmatic Axtone architect known as Lost Prince has returned to Axwell’s imprint to reclaim his rightful throne. To fill out a trilogy of Axtone cycles in 2021, Lost Prince has called in production assistance from D.V.R.X as well as vocal aid from Charlotte Haining—who both make their label debut—with the three combining artistic forces on “Everything I Do.”

While the observed current season might be fall, Lost Prince isn’t paying any notice to that with his latest release circuit, revisiting what felt like a summer that passed in the blink of an eye. Lost Prince and D.V.R.X set down a finely tuned base of piano house, roping in Haining to supply “Everything I Do” with a soulful, spellbinding vocal that will hopefully find its way into the label boss’s MDLBeast SOUNDSTORM’s tracklist come December.

The post Lost Prince directs D.V.R.X and Charlotte Haining to Axtone for future piano house classic, ‘Everything I Do’ appeared first on Dancing Astronaut.